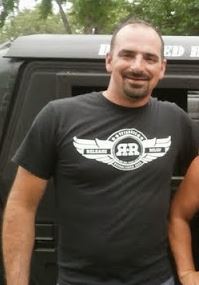 Jason is a founder of Veterans R&R. Nearly every male in his family served in the military, including one of his brothers, and Jason views the organization as a way of giving back to all the men and women that serve our country.

The first Veterans R&R program was a coat drive for homeless veterans and everyone ended up stuffing an entire cargo van with coats, clothes, gloves, and boots. It was an incredible experience—Jason never thought Veterans R&R would be as successful. He is enjoying learning to build an organization and gaining an understanding of the inside story of what our military members are going through on a day-to-day basis after serving.

Jason has worked in the production/events industry for decade, starting as a shop manager and moving up to technical coordinator, then technical director. He is currently IT Director at Lakeshore Audiovisual, Inc. (LSAV) in Chicago, a full-service audiovisual solutions and staging company for various types of live events including corporate meetings, conferences, exhibits, and trade shows. Because his career took him from a carpenter to an IT Director in the span of 6 years, Jason only watches television shows that he can learn from, such as the Science Channel, History Channel, and Nat Geo.

Jason has lived in IL for the past 10 years, and appreciates Wauconda’s outdoors, going trap shooting, boating, and enjoying bonfires at night. His secret passion is cars. But only fast ones. The faster, the better.