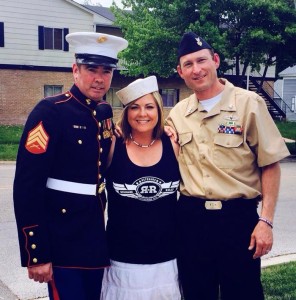 Jim Welch is the Founding member of Veterans R&R. After working with a group of Veterans in Lake and McHenry counties who were seeking alternative treatments for PTSD, Jim realized a need was not being met. He envisioned an organization dedicated to providing Veterans with educational and outreach programs that will help to enhance veterans’ productivity and quality of life.

A Veteran himself, Jim started his military career in 1993, serving in the United States Marine Corps as a heavy machine gunner in the infantry with 1st Battalion 4th Marines. He deployed with the 13th and 15th Marine Expeditionary Units Special Operations Capable, a Marine Air Ground Task Force based out of Marine Corps Base Camp Pendleton, California. By the time Jim was 21, he had been to 29 countries, and even celebrated his 21st birthday in Somalia.

After an honorable discharge as a Sergeant E-5 in 1997, Jim earned a Bachelor of Science degree from Illinois State University through the Montgomery GI Bill and the Illinois Veteran Grant. Over the last decade and a half, Jim has held various roles in technology business development servicing the fortune 500 and Federal Government. Jim is currently working for one of the largest Federal System Integrators

Jim’s passion for community extends beyond his work at Veterans R&R. Jim is the President of Maimans II Lakeside Manor Beach Association, Jr Past Commandant Marine Corps League, Member of the American Legion, and Moose Lodge.

Jim’s vision for Veterans R&R is first to form a community so that the 50% of Veterans who do not actively seek help have a place to go where help finds them. Reducing the rates of suicide and homelessness among Veterans is the larger goal.