Kimberley Bentele is the wife of Marine Corp Veteran Ryan Bentele, as well as a Board Member for Veteran’s R&R.  She lives in Woodstock, Illinois, with Ryan and their three children, Benjamin, Charlie, and Annabelle.  Kimberley met Ryan after he returned from a deployment to Iraq in 2005, and they have been together ever since.  She has helped Ryan deal with the physical and non-visible wounds of war, including PTSD and a TBI.  After finding Operation Wild Horse in 2017, Kimberley found there to be a profound change in Ryan’s PTSD symptoms. They have subsequently both devoted a great deal of time to community outreach and volunteering to help other Veteran families in the area.

Kimberley has an extensive military family history.  Her Father and Grandfather were in the Navy, with her Grandfather being in Japan during WWII.  She also had an Aunt that was a nurse in the Army during WWII.

After years of advocating for Ryan’s healthcare through the VA, Kimberley decided to become a nurse. She has worked extensively in psychiatric settings, including an inpatient mental health unit, as well as in a leadership position on a neuroscience unit.  She currently works in a local hospital in the Emergency Room and Intensive Care Unit.  While she loved working at the bedside with patients, she felt a need to serve the community on a deeper level and graduate in October as a Family Nurse Practitioner.  She hopes to be able to work with the Veteran population in a Primary Care setting. 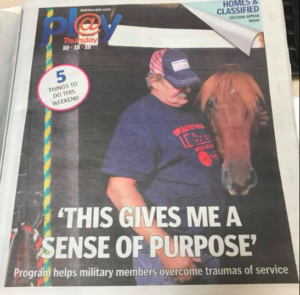 Sponsor A Veteran Or Military Family For A Year $2500

Your sponsorship will provide service to a Veteran or Military Family at ZERO cost for a year. This gives them access to an incredible laid-back environment located on 10 acres of beautiful country in Bull Valley IL. OWH has 12 program horses to watch out in the pasture, learn to ride or just enjoy their company. Additionally, this is home to a growing community of Veteran and Military Supporters were trust and relationships are built allowing barriers to fall and healing to occur. A place to work through the daily challenges of life that have been multiplied by military service. Veteran and Military Families have access to hundreds of hands on activities with American Mustang Horses. But most importantly we offer the ability to build a relationship with an American Mustang which has time and time again said to be life changing.

Bedding, Stabling, Training, Supplements, Grain, Salt, Cookies and more. When sponsor the OWH Herd our Mustang will have access to the industries best care, nutrition, and equine professionals ensuring safety for the horse, rider, and spectator.

Veterinarian, Farrier, Chiropractic, Dentistry, Massage Therapy, Equipment, Blankets, Halters and more. When you Sponsor the OWH Herd our Mustangs will have access to the industries best health professionals and equipment, ensuring safety for the horse, rider, and spectator.

As a thank you, Essential & Wellness Sponsors will receive:

Each Mustang consumes rightly a bill of hay per day. With the rising hay costs your sponsorship will provide a mustang with access to hay 24×7.

As a thank you Half Year Hay Sponsors will receive: