Veterans and Mustangs bringing hope, one neighborhood at a time!
Softening the blow of COVID19 “Isolation”. For those Americans that have not experience isolation and loneliness the COVID19 pandemic is providing a view into what many Veterans and Military families have suffered from for many years.

Isolation or in the Veteran and Military Family arena what has been termed as “Self Isolation or Social Isolation” or becoming “Prisoner of their own homes, couches, or basements” it’s indisputable that loneliness and boredom have profound effects on health and well being. This is a major contributing factor to the devastating numbers of Veteran and Military Family Suicides.

Operation Wild Horse has built a community of Veterans and Military families that works to stop the downward spiral to a dark place on no return. 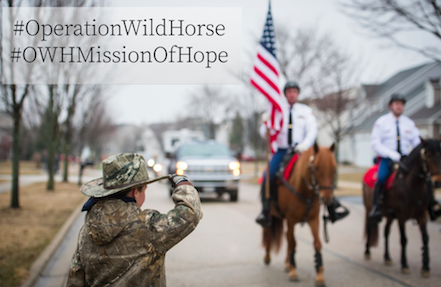 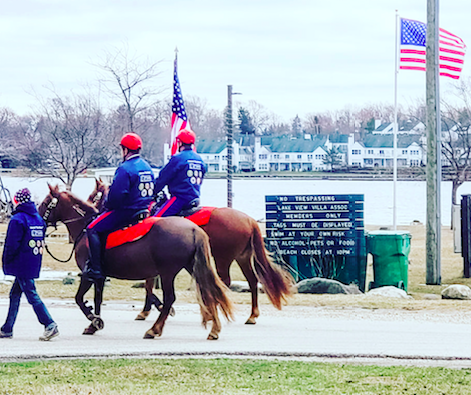 Bull Valley, Ill.— 03-19-2020 — On March 18, Operation Wild Horse launched its Mission of Hope campaign. The organization that has brought United States veterans and wild mustangs together to help transition veterans out of isolation is coming to a neighborhood near you.

“We, as veterans, know the pain and the challenges that come with isolation,” Operation Wild Horse President and U.S. Marine Corps Veteran, Jimmy Welch said. “And we understand what America is going through right now. We are going to get through this together – we are not alone.”

On March 18, OWH brought two wild mustang horses to Wauconda, Ill. Liberty Lakes subdivision to spread their message of both hope and unity in the midst of these isolating times.  U.S. Marine Corps Veterans  Jim Welch and Ryan Bentele rode mustangs Little Red Hot and Phoenix Rising. The mounted color guard walked through the neighborhood bringing patriotic music with them. Proudly holding the American Flag, Welch encouraged those who stood outside of their homes and in their driveways.

“We will get through this, America,” he said.

Elaine Buckely saw OWH as she stood outside with her young children, Everette and Serena.

“It was so great,” Buckely said. “It is inspiring. The children loved it, and it was a much-appreciated distraction from what is going on right now.”

OWH plans to take Mission of Hope to as many neighborhoods as they can.

“We are united under the American Flag,” Welch explained. “Old Glory has been flying for nearly 250 years. It is a symbol of strength. Fighting this virus has been described as fighting a war. America is going to win this war, because we are strong, and we will come together as a nation – isolating ourselves in solidarity to win the battle. Old Glory, has been carried through battles for hundreds of years, she will not run and she will not hide, we will carry her through this battle and she will win and we the American people will win”.

As often as weather permits, OWH will take their horses, Old Glory, and their encouraging spirit, play patriotic music, and bring hope. To support social distancing, neighbors are encouraged to remain six feet from one other on the sidewalk, in driveways, or in doorways.

Founded by Patti Gruber as a program of Veterans R&R 501c3 (established 2013), Operation Wild Horse works to engage veterans and military families in an active community where trust and relationships are built, and to be a bridge that helps connect those they serve with their programs and other Veteran Servicing Organizations. OWH pairs wild mustangs with veterans to put a stop to them becoming prisoners of their own homes. Together, they have created a new mission – to give hope to those who are facing the loneliness of isolation that they, so often, know too well.